To say last week was a bit mixed would be a massive understatement. I had the very sad news that my Nannan passed away (that's Grandmother to non-Sheffielders), but then also a lovely day for my Nephew's 2nd birthday where my young son and nephews joined forces to basically beat the crap out of me. Somehow with all this going on I managed to put in my highest hours worked total for nearly 6 months.

Having said last week that I'd settled on my next project, I then had a complete change of heart and decided to shelve it. While idle/clicker games are currently all the rage, I'm personally pretty bored with the genre at the moment and unless or until that changes I don't think I could bring the enthusiasm to the project that it would need. As I've mentioned in previous posts, this is where being slow to prototype new games can be a problem. Thankfully though, I've already done a big chunk of the next prototype which is based on an idea I've been wanting to pursue for a while now. I'm a little wary about going into details too early again, but it's a simple shoot 'em up with a fairly complex crafting/trading/upgrading system behind it to sustain interest.

September was a tough month for work, with plenty of ups and downs to distract me. My hours worked total was pretty poor, and would have been even worse without the late push. While it may be understandable I do need to do much better this month and I'm aiming to beat my previous record for hours worked which currently stands at 129.5 in a month.
Twitter follower growth (follow me here!) slowed quite a bit in September, I'm not following back as many people as I used to in an effort to keep my timeline readable and it does seem to have had an effect, however more than 100 new followers is still nice to see.
This blog had a great month though, August had already beaten the previous record by nearly 50% and once again views/day has jumped another 50% in September. A big thanks to everyone for reading. The idea behind the blog is to collect my ideas together and hold myself accountable, but since I started the blog in February readership has increased five-fold which is pretty satisfying.

My latest game, Zombie Cannon Attack!, is available for FREE on web and android. Give it a try and let me know what you think. 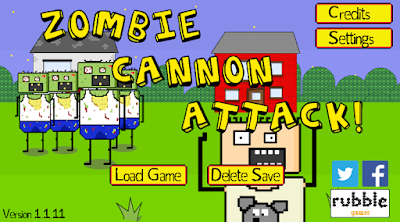