Wow, sitting down to write this I realised it's my first 'weekly' development blog for two months, although I did post my round-up of 2017 and (finally) the postmortem of my latest game, Zombie Cannon Attack!, during that time.
I've been very busy for the last three months working on making games for a client so work on my own projects has taken a back seat, however as the client work looks likely to last for a while I've made an effort to start setting aside a bit of time for my own game in the hope that I'll be able to get back to making enough progress to justify weekly blogging.

My current project is a sci-fi themed shoot 'em up where the player gathers materials and uses them to craft their own equipment. It has the inventive working title of 'Space Crafter', but hopefully I'll be able to come up with something more exciting during the development process. Initially the idea was to keep the shooter part very simple - a fast moving side scroller with no jumping and autofire, a game that could be played with two buttons to control movement (or even one at a push (sorry)). To sustain player interest the game would throw large amounts of materials and experience points at the player and have a fairly complex crafting and equipping section to act as a break.


I love it when a plan ... changes completely part way through

So I had a nice simple idea, but anyone familiar with this blog or indeed with game development in general will know what's coming next. The art assets I'd taken a liking to were really designed for a top-down view, and although the character sprites work fine for a side-on view most of the backdrop sprites don't look as good. I'm determined that I'm not going to release anything else that I'm not satisfied with visually so I decided to switch to a top-down view. This has immediately made the game much more complicated as the player can now move in at least four and more likely eight directions. Also the enemy AI, which under the old system was basically 'move left', now has to track and follow a much more versatile player and therefore has to be much more complicated.


Don't be a fool, stay in school

Phaser has some built in follow functions that I used to create different enemy behaviours in my first game, but much of what I did was to try and mask the fact that I didn't have the expertise to properly implement AI pathing to move the enemies around obstacles and find the quickest route to the player. It didn't help that I wasn't really using tilemaps. I've toyed with using tilemaps in my games (this is basically building the play area out of chunks of equal size that slot together like tiles) but my first attempt was a bit of a cobbled together mess and for Zombie Cannon Attack! I ended up going with something much simpler for performance reasons.
Although I'd not initially planned to do it on this project, learning pathing and tilemaps was on my list of things to do in gamedev. I've already successfully implemented a test tilemap and added pathing behaviour to npcs, hopefully most of the work now will be adding more of the same and fine-tuning.

I usually post a few stats at the beginning of each month to help me track progress, and I've now been blogging for a year (my first ever post was on 8th Feb 2017) so it's a good time to have a look at some numbers. I wasn't very active in December/January so I've just mixed the stats together a little. In total this blog had 7194 views last year, an average of around 20 per day, but at it's peak when I was blogging more consistently I was getting around double that. I started my Twitter account at the same time so I've gone from 0 to nearly 2000 followers over the year. Not too bad.
I took a fair bit of time off over Christmas and New Year which has obviously affected my hours worked, but as I've been earning plenty from client work it's not something I'm too worried about.


That's all for this week, thanks for reading. If you want to keep up to date you can also follow me on Twitter.
My latest game, Zombie Cannon Attack!, is available on all these platforms:
Android
itch.io (desktop download)
Gamejolt (web & desktop)
Kongregate (web)
Give it a try and let me know what you think, feedback is always welcome. 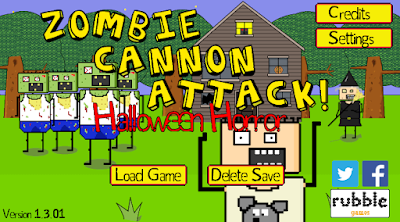 Posted by Rubble Games at 10:00 No comments: