I've had a pretty productive week. My hours worked were up again and I feel like I've got a lot to show for it too. Having said Zombie Cannon Attack! was nearly finished and I wasn't expecting to make any changes to the visuals or add new features, I then changed most of the background and added another obstacle for the later game. You can see the latest screenshots below, I'm still thinking over whether this is the final version or not. I felt the old version of the sky looked too empty, but now I'm wondering whether the new version is a little dark. 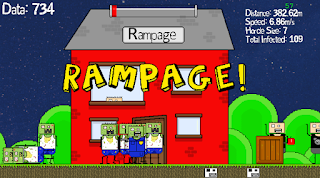 Pixel Art at a Premium

For most of the week I worked on building the premium currency store and the front end for the in-app purchase store, I've added a few images to stop it looking too plain and I'm pretty happy with them. One of the many bonuses from this project has been making my own pixel art, although it is really time consuming and I'm not up to professional standards yet. I'm planning to buy assets for the next few projects, but eventually I'd like to be able to do my own art without having to worry whether I'm sacrificing quality.

A Look at What's in (Play) Store

I spent most of Sunday working on getting the Android version ready for the Google Play store. It was a lot of work but I managed to publish a closed Alpha version, however due to a testing fail it didn't actually work. The problem was pretty minor and is now fixed, but I've made a few other changes to boost performance so I'll wait before re-releasing. I've then got to work on integrating the in-app purchases and video adverts, which is something else I've never done before so it could take days or weeks. I'll be glad to get ZCA released, although I've learned a great deal on this project I'm a few weeks behind the initial schedule I set when I started back in March and I don't want it to eat up too much of next month.
Posted by Rubble Games at 13:27 No comments:

Another week of steady progress, productivity wise my hours worked were up a little again, I'm still slightly below target but May is looking much better than April so far. I spent most of the week polishing Zombie Cannon Attack! and working on the Android version.


Two versions are better than (n)one

I'm strongly leaning towards releasing a demo web version and an Android version with more content, possibly with an iOS version to follow. I've made the decision to add a premium currency shop even though the game may be a little small for it, it'll be good experience for later games. I got to know the Phaser engine and web portals pretty well with my first game (Super Endless Kingdom), now with ZCA I'm learning a lot about mobile development including touch screen controls, scaling for different screen sizes and using Cordova to make an Android version with Play Store integration. Hopefully this will make things easier for my next project, so I can do something a little larger in scope without it taking too long.

I also made my first ZCA gameplay gif this week for Screenshot Saturday, using a great little program called screentogif. It was really easy to use and I highly recommend it.

Not much to report this week I'm afraid, my hours worked were slightly up again but I don't feel like I've as much to show from it this time. This is largely because I spent most of the week doing boring business stuff like researching potential license sales for Zombie Cannon Attack! but I do have a decent size spreadsheet of contacts who I can start, er, contacting soon.

I then spent the weekend wrestling with Apache Cordova, for anyone not familiar with this it basically turns my HTML5 browser games into a phone/tablet app. Most of the problem was getting everything installed correctly, but now having done that I have a basic working Android version. It still needs a lot of work to integrate with Android API etc and add the features you'd expect to see in a mobile game, but up until now I wasn't sure it would work at all so it feels pretty good to have got far enough to know that it will work eventually.


Pic me up
I'm planning a fairly detailed post on Zombie Cannon Attack! soon, but in the meantime I'll share a few new screenshots.
I still feel the sky looks a little plain. As well as the clouds there are also stars but they don't show up very well in these pictures. I've actually spent time today making the stars a little more visible and also making them twinkle, it's the little things that matter (though possibly not this little).

Posted by Rubble Games at 10:50 No comments:

So, Zombie Cannon Attack! is very nearly finished and I'm into the final testing, polishing and balancing stage of development. I find motivating myself during this stage a bit tougher and that's reflected a little in terms of hours last week which were still a little below average, although they were higher than I've managed for nearly a month and once again I got plenty done.


You won't believe what happened to the to-do list!

I added a music track for the title screen. I really love the track I've found, it's perfect for the type of game I'm making. I finished and tested the save system, it's only a local save to your browser but that's enough for a game of this size. I also added a simple credits screen and finished the tutorial (although I have a little more testing to do on this), added a few visual and sound effects to emphasize power-ups and added a proper results screen. That was pretty much my entire to-do list from last week. I spent the rest of the week adding small graphical touches and adjusting the volume on the sound effects as they were a little overwhelming when a lot was happening.

I've also done some limited user testing, although I haven't really got anything useful from the testers yet I still find it helps me focus on areas that need improvement. There's something about knowing other people are going to start seeing my game in action that raises the standards I set for myself and makes me more focused on the user experience, especially the early game. One conclusion I've come to is that the game was starting off a little too slowly. A common feature of endless runner type games is an upgrade shop that helps the player get further, I want the player to feel they're making constant progress but the first few runs weren't feeling particularly rewarding. The runs are pretty short but even so players have limited patience and goodwill, I don't want to burn through that limited supply before the player starts feeling rewarded. I've already made a few small changes to try and fix this, but I need to be careful not to unbalance the later game which is working fine.

Once I'm happy with the game I plan to talk to potential partners about licenses and get the game ready for an Android release while incorporating feedback. If you would like to test the game I'm looking to add a few more testers, and if you give me useful feedback I'll be happy to add your name to the credits section. Contact me via Twitter or email me (rubble.game.studio@gmail.com).

Thanks for reading. All the best 😃

Another fairly quiet week in terms of hours worked, although with the school holidays over I was able to do a bit more. However I still feel like I accomplished plenty, which is pretty much the story of the month as a whole (see below)

I've done a little more work on the tutorial and made further improvements to the medals/achievements section (see last week's blog for more on this), it's now improved to the point where I feel I need to do more work on the shop/upgrades screen as this now looks a little plain in comparison. This is often the way polishing goes for me, I work on the thing that bugs me the most until I have something I'm happy with then other areas I was previously happy with start to look
in need of an overhaul.

I love it when a (game) comes together

I've added a title screen and got to work on a basic save game function. I've also added a couple of music tracks that I'm pretty happy with, they fit the theme of the game really nicely. Finally I've been working on scaling the game for mobile devices and improving performance. I've a little more to do on both of these but it's really just to see if I can add a little extra, everything that's there works fine.

Still to do: I need a music track for the title screen, I need to finish the save system and add a small credits screen (just for music and few SFX this time). I have one more element to add to the tutorial and a few visual and sound effects to emphasize power-ups. That's really not that much.

I've done almost no coding on Super Endless Kingdom in April, but I've in no way abandoned the project. I now have enough ideas for improvements to hopefully finish the game and I'll get back to it before too long. The game was featured on the Phaser site recently (Phaser is the framework my games are built on top of), with Phaser's creator Richard Davey saying nice things and making the game his staff pick in his weekly newsletter.
It's not too late to give me your feedback, any ideas you have could still make the finished game so give it a try. The most up to date version is on Newgrounds here.

In terms of hours worked, April was by far my least productive of the year so far. It's pretty easily explained by the two weeks of school holidays that meant I spent more time looking after my son, as well as birthdays and bank holidays where I took time to spend with my family, and a few days lost to illness. Still, it's something I need to keep an eye on.
I'm pretty happy with the work I did in April, as I've said Zombie Cannon Attack! is getting pretty close to completion. I've learnt a decent amount about optimising my code and social media continues to show healthy growth. Special thanks to my partner for getting the Rubble Games facebook page up and running, but it's also nice to see this blog continue to grow steadily.

Posted by Rubble Games at 07:14 No comments: