Hello and welcome to my first weekly development progress report. Although I've been developing for around 8 months now it's only in the last month or so that I've started documenting and recording my progress. My previous blog posts should've brought you more or less up to date with where I am, so what have I done in the last week?

Over the previous weekend I'd got the studio website up and running (check it out at www.rubblegames.com) and I spent the start of the week finishing it off and adding details. I'm pretty happy with how it looks now - it's got a nice clean look and works well in different browsers and screen sizes. I'd had a few problems with the game site (www.superendlesskingdom.com) and I still feel like that site needs a rework to make the layout less cluttered but also add more content, so it was nice to get the studio site sorted in just a few days. If you have any feedback please let me know. 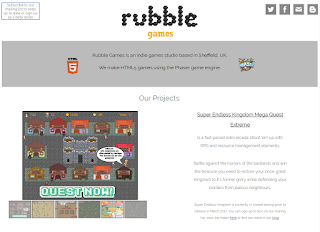 I've no idea how long I've spent testing this game over the months, between testing specific parts and full playthroughs I would guess I'm well into 3 digits. Every time I've played for any significant amount of time I've come away with a decent list of fixes and improvements to make so I've been a little complacent about getting someone else to test for me. Last week I got my first really good dose of feedback and it was a bit of an eye-opener for me.
User testing identified that the beginning of the game needed more explanation and that the initial difficulty was way too high. As a result I fixed a few small bugs and added several lines of dialogue to explain more of the basics but also made the first levels much easier to give players a gentler start. I also added more visual indicators, for example I've made the mana bar flash when you try and shoot but you're out of mana, and added colour coded updates on yearly gold and population changes to the main city screen. All these changes came about from around 10 minutes of pretty informal user testing.
As I discussed previously, the game has a simple track where rewards boost your character to help you push further when questing and so get better rewards and so on, but the high initial difficulty was preventing my tester from getting on that track to start with and so was effectively game breaking. The game is still tough and the difficulty increases fairly quickly as you progress but seeing that reward cycle a few times before the difficulty really kicks in should provide enough incentive to push that little bit further and keep coming back for more.

I spent the rest of the week working on mobile functionality. Super Endless Kingdom was designed primarily to be played on a desktop with keyboard controls, but adding touch controls is pretty simple in Phaser, I didn't have to do much more than follow the example and link the touch results to the existing outcomes of keyboard inputs. Once one touch button was working it just required replicating for the remaining buttons, which involved a fair bit of mildly tedious copy and paste followed by some more rewarding problem solving to fine tune.
Initially I repurposed an existing arrow button as a placeholder image before replacing it with my own pixel art loosely based on the NES control pad (see pic above). I haven't done much of my own pixel art so I was happy with the results, even if you can't really see some of the finer details as the controls are semi-transparent.
I've spent a few days testing and tweaking the results as well as working on the way the game displays in mobile browsers. I'm happy with how the game works on a tablet but I've come to the conclusion that a phone screen size is just too small to be able to properly control your character, so when I start developing the game as an android app I'll probably restrict it to tablets only.

Before I started writing this post I was feeling like I hadn't made much progress last week, but now I'm not so sure. As for the coming week, I have a few more changes to make but hopefully I'll be ready to launch open beta testing before the weekend. Stay tuned on twitter for an announcement.
Posted by Rubble Games at 07:28